For a quick fix, fill out the form below and receive my Stop the Chatter HypnoSnax, a complimentary introductory audio session.

Included is an Unstuck Living newsletter subscription containing short articles, tips, and inspirational quotes to help you end old patterns and get unstuck. Privacy is important to us. Your information will not be shared. (See Privacy Policy)

The Challenge of Darkness 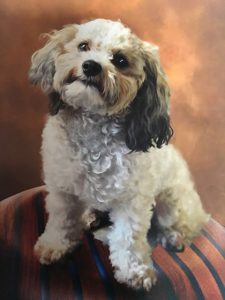 Duff here. Last weekend, Mom and I went to the Hot Air Balloon Festival. Mom wanted to see the Glow, where these Giant gizmos Light Up as they Sail along in the Night Skies. We were late in getting there, and parking was non-existent. So We parked in a Field of weeds. Note: It was Dark. No Lights. And Mom wanted to get Out and watch Immediately. I am usually the First one to Hop out of The Car. But this time, I looked down and saw this Inky Chasm filled with Vegetation. Mom didn’t notice, for She was intent on the Balloons. I balked a Number of Times as She urged Me on. But She finally noticed the Problem and set Me down on the Ground. Finally living unstuck.

The Weeds were taller than I was by six inches. It’s one Thing to be a Lion Dog when it is Daytime. But this was a Totally different Thing. I tromped through the Brush, Grumbling to Myself. It was Dense Black, and Mom guided me to a flat Area with no Vegetation. We watched for a Time. Or I should say, She watched and I Checked out the Territory. When We left, Mom picked me up and Tucked me back in the Car. Now, that’s living unstuck.

Have You had a Time where you were challenged by Darkness? I’m here to tell You: It’s a Problem that needs to be Solved. I say: Go for it. And if You need Help, just ask. It’s usually there. Live unstuck. #unstuck-living#the-challenge-ofdarkness

Walking with a friend in the dark is better than walking alone in the light.

P.S. Our Picture is from the Uplift the day after the Glow. At least it was Daytime.

The Challenge of Darkness was last modified: July 8th, 2019 by Joan Courtney
No Comments
Categories : World According to Duff
← Next Post
Previous Post →