For a quick fix, fill out the form below and receive my Stop the Chatter HypnoSnax, a complimentary introductory audio session.

Included is an Unstuck Living newsletter subscription containing short articles, tips, and inspirational quotes to help you end old patterns and get unstuck. Privacy is important to us. Your information will not be shared. (See Privacy Policy) 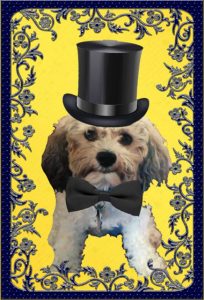 Duff here. My favorite Food Bowl was white, with A Dog that looked just like Me on It. My Replica had on a Blue Cape and was Flying across the Skies. Can You imagine? I loved My Bowl. Living unstuck.

The other day, Mom was preparing My breakfast. It smelled Scrumptious. But Her hand was wet as She picked up the Dish. It fell and shattered into a Million Pieces on the Floor. My Breakfast and My Bowl were all over the Kitchen. I looked so mournfully at Her. That was my Bestest Bowl.

She cleaned up Her Mess. Then another Meal was placed in a plastic Bowl. I took one look and Sat down. Nope. That’s Not it. She tried again and again with two Different Dishes. I turned them all Down. I wanted My favorite Bowl. Then, it was time To Go to Work. She put a piece of Plastic Wrap over the dish, put it in the refrigerator and Headed Out the Door.

I stared in Shock. Where was My breakfast? I quickly checked the Floor and found three Very Small Pieces of Dry Dog Food. That would have to Do. By Dinner, I was ready for nourishment in any Bowl. It didn’t matter. I was so Hungry. Lived unstuck.

Have You had an Attachment to Something, only to Lose it in Some Way? Did You hang on for Awhile? Or Were You able to Release It? I say: Let it Go. After a Time, the Replacement works Very Well. Live unstuck. #unstuck-living#letting-go 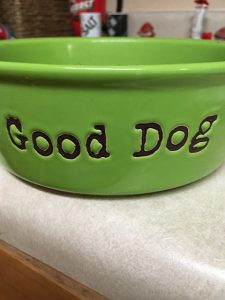 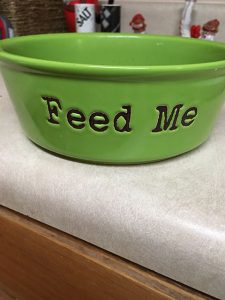 Update: I now have a New Bowl. It’s sturdy and Green. The phrase “Good Dog” is on one Side. On the other? “Feed Me.” Either Way, I win!

Sometimes the hardest part isn’t letting go but rather learning to start over.